Serpents Eve are proud to announce that Loneravn Records have signed a deal to release both "The Slow Knife" and the "MMXVII" EPs with worldwide digital distribution from the 15th February. This includes Apple Music, Spotify, Deezer, Amazon music and much more. After 15th February, the EP's will no longer be available as a "name your price" download on bandcamp so feel free to download or buy the EP's before then. Doom or be Doomed.

Posted by Martys guit-aaaaarrrrrgghhhhh!!! at 08:08 No comments:

"Super Dank Metal Jams" -which is an awesome name to begin with, did the (w)rite thing, and gave MMXVII a listen. Here is what they have to say:

"Serpents Eve from Northern Ireland are rising from the abyss to swing the mighty hammer of doom and lay waste to all who stand before them with their second release "MMXVII". It features four tracks of epic doom instrumentals inspired by the likes of Solitude Aeturnus and Candlemass and even without vocals it conjures a dark and powerful grandeur. Like a cartload of lead this is heavy as fuck with colossal rhythms that pull you into the band's menacing dominion. In lieu of a singer the guitar steps in and cries out with majestic melodies of power and sorrow. MMXVII clocks in at just under 20 minutes, but it feels a lot bigger than that. It's got the weight of a leviathan rising up out of the ocean and wreaking havoc upon a coastal city. I can practically hear it now - the guitar like a siren wailing out warnings of incoming danger, people crying out for their families, but you can tell from the anguished tone that it's too late. With dramatic pauses and all the beast is tearing through buildings creating mountains of mangled steel and rebar as countless souls perish beneath it. It's a terrible tragedy that I just made up, but it would be a REAL tragedy if you didn't check this out! -Brandon" 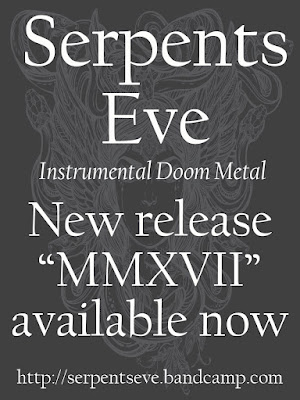 Posted by Martys guit-aaaaarrrrrgghhhhh!!! at 10:45 No comments:

What always interests me in Irish rock and metal is how committed metallers tend to stick around.

They may go away for a while – but sooner or later they’ll resurface in a new band unable to get the monkey off their backs. There are many examples.

And the point is that having been round the block a few times, they usually make incrementally better music.

Marty Robinson is formerly of Lesshelp, Spindrift, Devilmakesthree, as well as running a small recording outfit.

A staple of the Belfast scene, basically.

He’s been away for quite some time, but is now back with some music that for the most part is very different from all of what went before: doom. Not just doom. Instrumental doom.

Is this because Serpents Eve is a fundamentally studio effort, destined to be a tweaked and teased labour of bedroom love?

Or is it rather an effective audition tape for proper band members and a statement of intent for the beckoning live circuit?

I don’t know which, but either way, it’s strong.

Let’s get the first thing out of the way – this material is currently sans vocals. So there’s a big question there. Has he put it put too soon?

Doom isn’t really a genre where the instrumental form flourishes, in general. There’s a nagging question as to why a crooner isn’t mourning his guts out over the top of it. But let’s get past that on the basis that this is early days.

To the music. As I said earlier, it’s very different (mostly) from Mr Robinson’s prior musical output, which mainly consisted of downtuned, mid-to-late Carcass influenced guitar.

So when ‘March Of The Ancients’ opens up all Solstice, Trouble and Solitude Aeturnus, eyebrows are raised. It is extremely like those bands, right down to the solemnity of the riffing and the steeley intertwining of the beautiful anglicised riffing.

It does yearn for vocals, if only for completion. But the main vamp is excellent.

The next one is trouble, but not with a capital T. To be brutally honest, ‘Beware Of The Moon’ sounds like a track that didn’t make a Devilmakesthree EP – a detuned, Cathedral-bouncy and groovy riff with OK lead guitar over it. It just doesn’t fit into all this quite like it should.

It’s brooding, slow, and in an odd kind of way has the atmosphere of Slayer’s ‘Divine Intervention’ about it (‘what have I done… what’s become of me‘ lurks in the mind over the main riff), though of course that’s probably a million miles from the intention.

The simple, melodic riffing however is great, and the dirty, growly bass is a pleasure.

The dark, clean-but-gnarly guitar at the start of ‘Sons Of Nothing’ opens out into a fantastic homage to Candlemass, throbbing along and let down only by a rather grim snare texture on the old drum machine.

As a hark back to that early and mid Candlemass however, it’s great. It just needs vocals. Where those aren’t available however, the two contrasting lead guitar breaks – one a delicate Richie Kotzen turn, the other a wailing Gregor Mackintosh wah affair – give it vibrance.

So what’s Marty going to do with this? I don’t know. But it’s definitely floor filling stuff, and is good solid doom.

For what it’s worth I’d say that the groovy Gazz Jennings style of riffing on here should probably be left to a different project. It’s just too generic when Doom is the focus.

As far as the Doom goes, you can’t beat twin guitar heraldry as evidenced in ‘March Of The Ancients’. So in my opinion that shouldn’t be diluted. Because if Marty makes that the focus, we will have some superior material next time round.

For now though, it’s a superb audition tape for a talented singer. So who will heed the call?

Serpents Eve - March of the Ancients


Posted by Martys guit-aaaaarrrrrgghhhhh!!! at 09:24 No comments:

Note: This is a Google translation. Original is Greek(I think!).


Talented Serpents Eve I suppose that is the most new heavy band from Great Britain, as born this year in Northern Ireland and recently caught up and released their debut work, which is entitled The Slow Knife and has the form Ep traffic since it contains only 4 pieces total duration of 21 minutes.

This hearty, despite its small parcel, Ep, is framed by a simple artwork, but reveals the occult concerns Serpents Eve, while distinguished by its impeccable production, thanks to the dynamic and sufficiently heavy clarity of, lifts pieces explosive The Slow Knife, as beautifully highlights the organic texture.

The only instrumental character of The Slow Knife shows us in all its glory, both the synthetic inspiration of its creators, and their executive flair, combined with unbridled inspiration of Serpents Eve, we offer a highly addictive doom metal sound , overflowing heavy guts and oozing adrenaline.

The dynamic drums sprinkle with an intense aroma of progressive powder compositions of Serpents Eve and lead to abysmal metal paths, where the bass embellishes with doom touches explosive The Slow Knife so beautifully accompanies their untamed guitar, which always contrive torrential impetuous riffs and solos in traditional doom pattern.

The checkered texture of the pieces of the Husky The Slow Knife owes its casual incarnation in faint stoner aura that permeates the rough traditional doom metal style of Serpents Eve, who have successfully dress the ravishing and abysmal heavy music with strongly progressive timbres that add faded metal spikes in their sound.

Phantasmagoria blog
Posted by Martys guit-aaaaarrrrrgghhhhh!!! at 18:00 No comments:

Posted by Martys guit-aaaaarrrrrgghhhhh!!! at 11:32 No comments: